Greek Gods and the Olympics: From Myth to Reality

When we explore the birth of the Olympic games we come across several foundational legends that are embedded in myth, naturally Zeus sits in the epicenter of it all, but on the outer rims we are introduced to the heroes that contributed to the Olympic spirit and formation. Having said all this we cannot however, form one general assumption on the mythological beginning and history of the games, because evidence stems from more than one stratum. It is wise to commence with the early myths and work our way forward in order to establish how the Gods might have contributed to the very fundamentals that constituted the onset of the Olympic games. Bear in mind that the Greek myths were a shifting paradigm, one that moved fluidly with the ideologies of the Ancient Greeks. 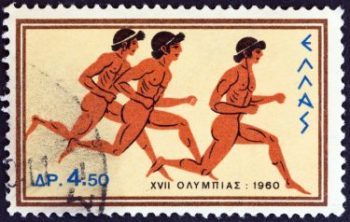 GREECE – CIRCA 1960: A stamp printed in Greece from the “Olympic Games, Rome” issue shows sprinting, circa 1960. (Image purchased from Shutterstock)

In the 13th Century BCE on the hill of Kronus, the early immigrants made sacrifices at the altar of Gaia and preformed rituals in honour of the goddess. Festivals were held in honor of the fertility goddess because the people believed that land its self was connected to the gods and goddesses and everything around them arose directly from the gods.

In the 12th Century BCE, the Achaeans arrived from the north and laid claim to the area then the worship of the goddesses disappeared and in their place the great Olympian father, Zeus was instituted. One myth tells the story of how Zeus cast a thunderbolt and it landed at Olympia, and there where the bolt scorched the earth, a temple was erected to honor him.

The Ancient authors that have gifted us with their literary works wrote their accounts many centuries after the commencement of the Olympic games.  One of the Western Canonical poets Pindar, attributes the foundation of the games to the legend of Hercules. The myth goes a little something like this; one of Heracles labors was to clean the stables of Augeas which where never cleaned and several feet deep in animal dung.  So Hercules bargained with Augeas that if he should clean the stables in a day he would receive a tenth of Augeas cattle. Augeas agreed, believing that it would be unmanageable. Hercules accomplished his task by diverting a near by river through the stables. Augeas refused to pay Hercules, so he killed Augeas and his sons and took all the spoils to Pisa. There he carved a sacred precedent in honour of his father Zeus. The best items from the picking were offered as dedications to Zeus and hence the birth of the Olympic games commenced. Whilst this is not the only version of a foundational myth, it does claim more popularity than some of the more gruesome myths.

Athletics were an integral part of Greek society and all that it encompassed because it was an act of worship, by participating the athletes were honoring the gods. Religion was the focus of the games and the most important part was the sacrifice, which took place on day three of the festival.  A procession would walk through Olympia and to the temple of Zeus where a multitude of oxen would be sacrificed. In the evening they would burn the oxen as offerings to the god Zeus, this was followed by a banquet for all the attendees. The games ran for five days and included; boxing, wrestling, discuss and running.  These games were a competition of greatness. There was no second or third status, only the position of one victor. To succeed meant that brutality was a given in the process but not without structure and rules. Winning was everything because the victor received more than the olive wreath upon his head. The winner would be seen as a demi-god. The victor’s home city would bestow on the winner honours fit for a king, a life time pension, olive oil supplies, seats at the theater and many other privileges including that of a priesthood if the victor desired it. 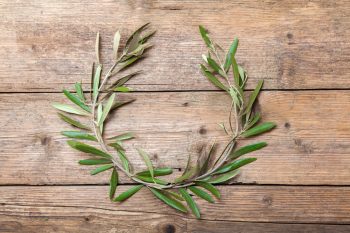 The olive wreath also known as kotinos was the prize for the winner at the ancient Olympic Games. (Image purchased from Shutterstock)

To illuminate how the Ancient Greeks saw and participated in the Olympic games we must understand that they were an extremely competitive society, who were driven by excellence and there was no room for second best. The Olympic games were one of the oldest Greek festivals, people travelled from every corner of the Ancient world to participate in a five-day event that showcased sporting brilliance.

The modern day Olympics also brings together Athletes and people from all over the globe. For the duration of the games people cheer each other on in good spirit and support. The Ancient and modern athlete share one thing in common; they are both worshiped as something divine, with the distinction being the ancient athlete was given a wreath and material provisions and the modern is awarded with a gold medal and sponsorship. There is an un-doubtable echo that the victors today are also seen as sporting demi-gods.

Home  »  Blog  »  Greek Gods and the Olympics: From Myth to Reality